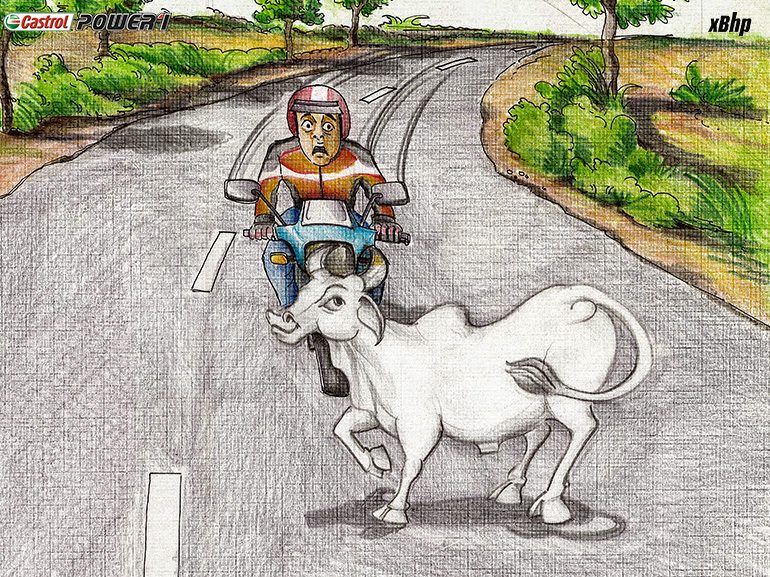 Few riders realize that the front brake is the most effective in a two wheeler. Just using the rear brake allows you to barely use some 30% of the total braking force possible. Using the front brake is like pushing the bike from its front against its direction of motion and this is far more effective that trying to pull it to a stop by hanging from behind it. Moreover, using the front brake throws a lot of weight on the front tyre and this allows it to grip the road better. Grade your braking so that some 70% of the braking effort comes from the front brake while the remaining 30% from the rear wheel. The rear brake is primarily to stabilize the bike and preventing a violent weight transfer onto the front wheel. Too much rear brake will lock up the rear wheel and the bike slides out of control. The only precautions while making full use of the front brake is to keep the bike upright and avoid its full application on wet or gravel roads. In slippery conditions, use the rear brake sparingly while making the most of the available engine braking. And while in a turn, try and straighten up the bike as much as possible before applying the brakes. Stop turning before you start braking.

Get used to the front fork dive on applying the front brakes. Be smooth but firm in the brake application (squeeze the lever as if it is the trigger of a gun, don’t grab it). The harder you learn to apply the front brake and the sooner you can get it to its full power, the shorter will be your stopping distance.

Ride with two fingers covering the front brake lever. In case of an emergency the natural reflex of clenching the fist automatically applies the brake. (By the way, almost all of the power in your fingers is in the first two.) To come to a smooth halt, bring the rear brake alone into action while releasing the front one just before coming to a full stop. The jolt that arises on stopping, from the front forks dive, does not happen this way. 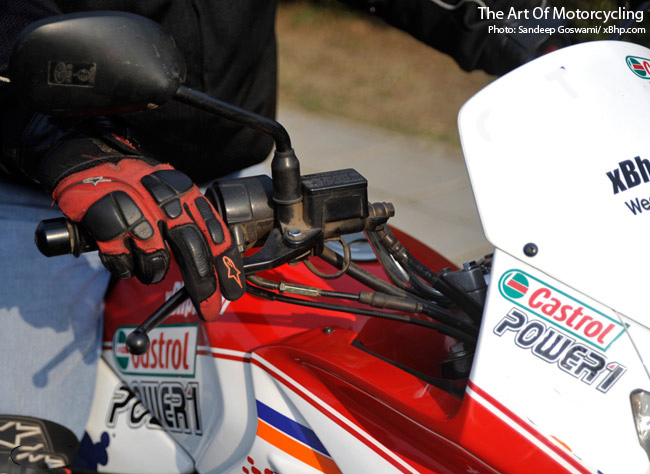 There’s a well known adage in aviation, particularly for fighter pilots, and it goes like this:  When an emergency arises your performance drops to the lowest level of training.

I have never come across a more realistic observation of deterioration of skills when under hostile fire. Practicing for emergencies is as good as the emergency simulation you do, actually a little worse than that. Which is why you need to practice so much that the needed actions become second nature, a ‘reflex’. And practicing the ‘right’ technique is critical because the ‘reflex’, once embedded in muscle memory, will not allow you to think and correct it if its wrong.

Becoming a proficient motorcyclist is a lifelong endeavor. You are either busy learning new skills or practicing old ones.

Braking is a very ‘critical’ skill for a motorcyclist. The real art in going fast is to know when to go slow and how to go slow. And getting it right, practicing it right and executing it right is what will keep you alive. Its one major ‘vital’ in the Vital few and trivial many aspects of motorcycling. Learning braking in real life urban riding situations is about including road traction assessment into your braking action. Practice the gentle squeeze to firm squeeze technique any and every time you brake while riding. Feel the firming up of the front brake lever under you fingers. Scan the road ahead for adjustments to braking. Check those RVM’s before, during and after braking. Feel the weight transfer drop the front and know that the rear has gone light by an equivalent amount. Practice each and every time you brake, so much so that you unthinkingly brake like that everytime. Aim for a point to stop and see how well you assessed the distance and braking effort needed. See that little piece of paper on the road, try to steer around it while you brake. Set up your line and entry speed to those turns to perfection. In a well set-up turn, whether on road or on track, you’ll not need emergency mid-turn corrections. It is only when you set up a turn on assumptions rather than knowledge of the road/track ahead that you need mid-course corrections.

Incessant learning is essentially what it is all about. Remember that a skilled rider will use his skilled brain to avoid needing those superior skills. Paradoxical but actually the only real way of enjoying your motorcycling and yet staying alive doing it.

Lots of useful information has been shared about ‘trail braking’ here. I’ll add a visual aspect to it and start with a diagram that I’ve taken from a book ‘Sport Riding Techniques’ by Nick Ienatsch.

The orthodox riding technique states that we finish all our braking and gear shifting while the bike is upright, enter the turn on constant throttle and just past the apex, feed in the throttle progressively. But the preferred method now is using ‘trail braking’. Trail Braking is a technique where the rider progressively reduces his braking force as he gets deeper into the turn and closer to the apex. This progressive and smooth reduction in braking is to use a progressively larger share of traction for turning, a need that hits its maximum at the apex, where the braking input is reduced to zero. Trail braking has two major benefits: 1. It allows for braking while turning, allowing the rider more control over his situation. and 2. The rider can carry speed deeper into the turn and by slowing progressively towards the apex, has more reserve traction to trade for the same needed for turning.

In practice, the overlap between trail braking and powering out is a smooth blend, always balancing the available traction to the traction needs.

Trail braking is a difficult skill to master primarily because as you brake during the turn, you put additional loads on the contact patches which are already fighting a hard battle for traction by countering the outward tangential force. Adding braking loads to the equation takes you closer to the edge of the traction envelope and even a slight excess in loading can lead to a washout.

As for the unassailable logic of favouring the front brakes, the related and at times disconcerting nose-dive and what happens when we do so was something I had posted earlier in another thread here quite sometime back. Reproducing the same below to maintain continuity as has been the case with the trail braking part above which is also taken from the same thread:

I guess we need to get back to high-school physics to clear this thing about forward weight transfer under braking, its benefits and demerits in its entirety.

Weight transfer is a physical reality that has to happen, whether there is a suspension system pre se or not. Refer to the fig in my previous mail that I am reproducing below:

Braking produces a force (because the rider/bike combo is in motion and braking means deceleration) that has eventually to act through the front tyre contact patch where it is countered by the force of friction between the road and the contact patch. Since the connection between the contact patch and the rest of the bike is primarily through the fork, a large component of this force travels down the forks. The exact quantum of this force transfer can be calculated by referring to the fig below:

As the forks are raked at an angle to the vertical, the force transferred through them can be calculated as a product of the total force and the Cosine of the angle of application of the force. Here the angle is the ‘rake’ angle minus 90deg (since the rake angle is measured against the vertical). Assuming a rake angle of 25deg and a braking force of 1N, the force component acting down the forks would be = 1 (N) x Cos(65) = 0.4226. Meaning that some 42% of the braking force shall act through the forks.

Let us assume a ZMA (about 150kg) with a rider weighing 70kg coming to a panic stop. Stock tyres on clean tarmac can give a decelration equal to about 1G i.e. about 9m/sec2

So the forks get pressed downwards by a force equivalent to 85kgs. No wonder they get compressed.

As you can see, the ‘softness’ or ‘stiffness’ of the suspension set-up has no meaning for weight transfer. The ‘weight Transfer’ is a Force that is generated due to braking. It is just that with a softer suspension, you get a larger deflection of the springs, more dive and so it ‘feels’ like there has been a LOT of weight transfer occurring.

And about Trail Braking: Loading up the front during a turn is not a ‘needed’ thing. It just happens because of braking and also because of the centrifugal force generated during a turn that compresses the suspension. Ideally, a completely unloaded front is the best as all the available traction is there for resisting the slide (the tangential force that wants to slide the bike ‘out’ of the turn). But in the real world, we can only strike a workable balance between the various forces to our benefit.

And suspension dive is what the rider needs the ‘least’ during a turn. The ‘quick steering’ benefit is way offset by the detrimental effects of a bottomed out suspension and an excess demand on the traction reserves.

You honk and flash at the car ahead and the driver promptly moves left, apparently making way for you. Don’t just rush past blindly. He could be moving left not for you but to avoid an obstacle.