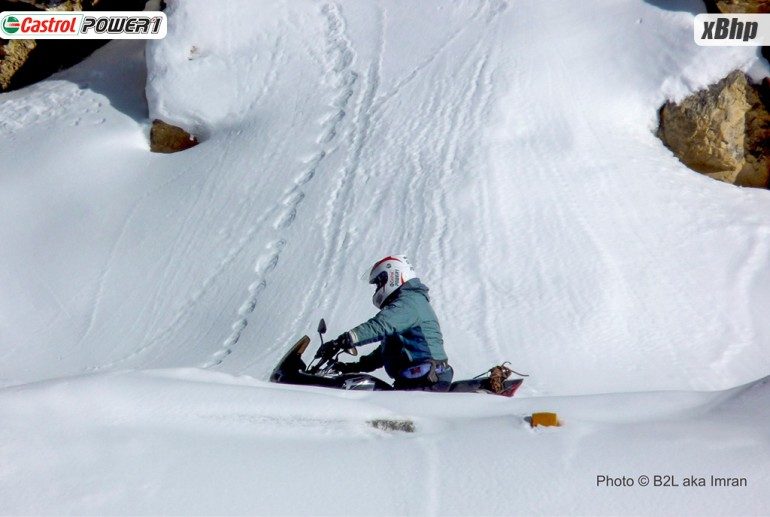 Winter Motorcycling in Ladakh
Riding motorcycles in Leh in the middle of winter may sound crazy but is possible and so has been done. Of course, it’s more difficult; your extent of travel can be severely limited, is definitely a lot more expensive and requires a much higher degree of preparation. The primary reason for these differences lies in the prevailing temperatures at that time of the year. With the mercury remaining well below freezing all the time and dipping down as much as – 40 deg C, the conditions are almost of Arctic proportions. But winter Ladakh offers the kind of beauty and exclusivity of experience that it makes all that frozen suffering worth its while.

The road route to Ladakh from the plains closes in late October/early November and so the only way to ride there in winter is to fly in and hire a bike to ride around. In and around Ladakh, the roads are generally declared to be closed from October onwards till sometime in May. During this period, there is no physical closure of the roads, as there will be minimal vehicular traffic between certain points which can be traversed during peak winter even, except during heavy snowfall and adverse road conditions. There is no guarantee on road conditions in the Ladakh district even in summer and so it can only get more unpredictable in winter. So it is virtually out of the question to plan around a timetable the normal way. You might need 6-7 buffer days in a 14 day ride plan.

Since you’ll be flying in and that too in such severe weather, Acclimatization of 2 days at least is a must, without which a ride must not even be attempted. The list of gear above may be extensive and expensive, but if one has to ride and survive in the extreme cold, preparation and some amount of investment has to be put in. The gear required is more towards hiking and survival than full on riding gear. This is simply because average speeds are very low in the snow and armour will not be in play in the case of a simple fall because of slips due to black ice and/or snow (These falls will happen if you’re riding in peak winter).

BIKE PREPARATION:
A bike with decent torque and reliability is a must in this weather. The best bikes in this category are either the HH Karizma, the Pulsar P220 or any of the Bullets. But make sure your bike has the kick-start option apart from self start. Lead-acid batteries are not very reliable in extreme cold conditions and push starting a bike alone, at altitude and with snow on the road will be your worst nightmare come true.

Carbureted bikes need to be tuned for high altitude, low oxygen conditions. Fuel injected ones would fare better although the condition of the battery is very critical in this case. Tyres must be having sufficient tread, and have to be run with lower pressures to gain some more grip.  Use a lighter grade engine oil like 10W30.

The bike needs to be lightened, stripped off any excess weight. Preferably, find a lodge or a place to dump luggage before attempting high altitude passes. Pushing a heavy bike up, in low oxygen sub zero temperature, is very very difficult. And you are more likely to not get a good foothold on the ground due to the black ice and/or snow, so you will slip and be on the ground in a flash. Lifting a heavy bike after a fall will be difficult for the same reasons. So, the lighter the bike is, the better. It will ascend a lot easier, and maneuver a lot more nimbler. Remove any or all electrical modifications which are hampering the bike’s reliability.

RIDING
Momentum is the single biggest factor while riding in the area. Keep a steady pace around 20-30 kmph at most and slower in narrow ascends, and navigate hairpin or sharp bends riding the momentum in low gear. This requires some planning and looking up and beyond the curve as far as possible.

Keep realistic distance targets for an hour, with frequent stops for water. Water must be kept wrapped so as to prevent freezing.

Windchill is a very important factor to consider when riding in winter. There must be NO exposed skin while riding. Keeping warm while riding is life saving at this time of the year. If you have heated grips, and a heated jacket, nothing like it. But otherwise, wearing multiple layers underneath the outer gear is advisable. Covering up the nose and mouth is also important, as a lot of body heat is lost while respiring.

In case you drop the bike at slow speed or slide out, take some time to collect yourself. Find a proper spot where you get a good foothold, and get the bike back up, while expending as little energy as possible.

If by chance your gloves or boots get wet, immediately dry them out to avoid bigger problems like frostbite. Frostbite is very sneaky and will set in without you even feeling it, and damp gear will only make it faster.

Finally, while the winter vistas are stunning and are completely different from what you may see in a Ladakhi summer, don’t spend time looking for landmarks and boards for bragging rights back home. Most of the milestones and boards put up by the BRO will be either covered by snow, or will be completely under snow. Don’t waste precious time and body heat walking around taking photos.

And when it comes to photos, use a camera which has the least moving parts, as moisture between the moving parts can freeze up and jam up causing damage. Also, carry more batteries as battery life is reduced under extreme cold.

Also, discretion is the better part of valour. If you find the riding difficult, head back ASAP and enjoy the winter from the warmth of your hotel. There is no such thing as being brave and plugging on in conditions that one cannot ride in. Things can go downhill rapidly and it can get very grave in no time, before you know it. So, at the first signs of difficulties, be it with the bike, yourself, or the weather, turn back and head for safety. There will be another day to attempt that destination!

Finally, enjoy yourself. The cold, winter air has many takers and riding in such terrain seen by so few people outside the region, is something to be experienced. Make the driver of the vehicle you want to overtake aware of your presence and your intentions. Honk your horn and flash your lights. The lights are eye catching in the mirror even in bright sunlight.