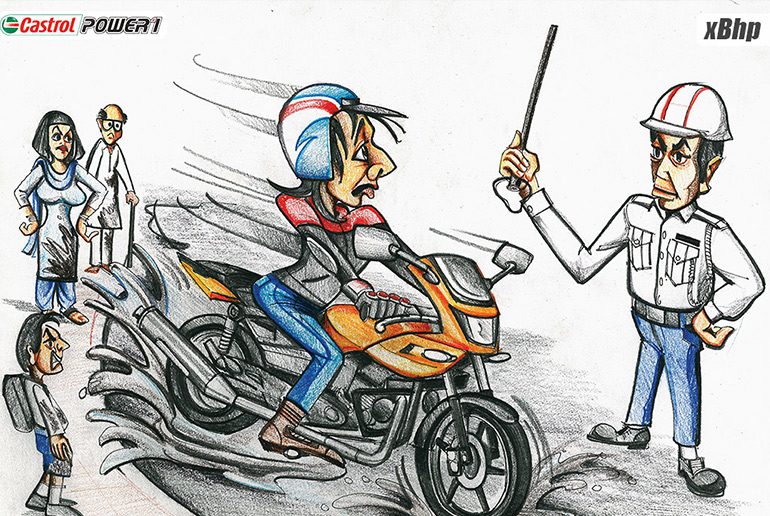 Liquid sunshine brings out the best and worst of all riders. Riding in the wet requires you to be aware of the low friction conditions that exist between the tyres and the road. This can be dangerous but if you are cautious and aware of the hazards, it is no more dangerous than any other normal day. And it is only through riding in the rain that you become aware of your own capabilities and limitations and those of your bike and its tyres in such weather. Tyres have grooves in their tread and their purpose is to remove water from under the contact patch. Obviously, if the tyre is worn smooth with no grooves left, water on the road stays trapped under the tyre and it slips. Tyres in good condition with sticky rubber inflated to the recommended pressure go a long way in improving the grip.

Apart from good tyres, the trick to maintaining traction when riding is smoothness. All transitions i.e. acceleration, braking, gear shifting and turning should be accomplished smoothly. Be gentle in braking and acceleration and follow the widest possible arcs during cornering. Remember road grip is already fighting a losing battle with slippery conditions. Your tire traction is cut by as much as TWO-THIRDS on wet roads. Don’t make it worse for the tyres by demanding too much from them and in too short a time. Retaining your traction in the wet is far easier than regaining it. a slide that can be corrected in the dry will almost certainly take you down in the wet.

Brake gently, using more of the rear brake than the front (just the opposite of what you would do in the dry). Keep checking your brakes for effectiveness when riding in heavy rain or through deep water. Drum brakes, though difficult to get wet from inside, take time in drying and become effective again. If wet, ride a while with the brake applied partially. The heat generated due to friction between the brake shoes and the drum will soon dry it out. Discs usually work fine though there may be a tiny delay before full effectivity as the pads wipe water from the disc surface.

The roads are at their slipperiest after a light shower. Rubber powder from tyres along with dust and oil, when mixed with water, forms a very slippery concoction. Let consistent heavy rain wash off the roads clean before expecting respectable amounts of traction. Oil droppings from four-wheelers are concentrated around the middle of the road, at stoplights, near petrol stations and toll collection booths. Large trees, whose inviting shade is a great stopping zone for vehicles are also virtual oil reservoirs. Take it easy with the brakes and the throttle when passing through any of these. Better still get in touch with the traction available by testing in safe conditions. On a straight flat road, make sure you’re not being followed by another vehicle and slow down to 20-25 kph. Tap on the rear brake hard enough to make the rear wheel lock. Assuming you are familiar with how much of braking force on the pedal is needed to lock the same wheel in the dry, you’ll get a proportional idea of how much less traction you have in the wet. Painted strips, old metal manhole covers, wet leaves and railroad tracks at crossings are very slippery customers even in the dry and more so when wet.

The key to riding safe in limited traction conditions like when the roads are wet lies in being smooth in all you do on the bike. Avoid abrupt changes in direction, braking and accelerating over these. Get on the throttle progressively and take a turn in a gear higher than you would in the dry. Allow yourself more braking distance and do the same for other road users around you. The car driver behind you might be a late braker and might lock up his tyres and slide for a longer distance than what’s available between you and him. So keep a very sharp eye on those RVM’s for tail-gaters.

Vision is another thing that’s pretty adversely affected by rain. The low contrast lighting, fogging of windows and wind-shield and a moving target like a motorcycle makes you almost invisible to that slightly inattentive driver. So prefer bright colored helmets and rain-suits, ride with your lights on and be almost paranoid about those drivers who begin getting too close to comfort to your bike. Check how difficult it is for you to pick out other motorcyclists and cyclists and you’ll get a fair idea of what it would be like from the inside of a 4-wheeler with fogged up glasses. You have the advantage that the water droplets on your helmet visor are close enough to the eye to be blurred compared to the rest of the world in front. But it is not so for the car driver with his wind-shield at least a couple of feet in front.

Avoid, I repeat ‘avoid’ riding in the rain after dark. The lights from the oncoming vehicles scatter and dazzle even with the cleanest of helmet visors. Even the brake lights are at times bright enough to become a problem. Adding to your ‘visual’ woes is the gunk thrown up by other vehicles that splatters on your visor and cuts down visibility drastically.

Hydroplaning is the result of your tires moving fast across a wet surface – so fast that they do not have sufficient time to channel that moisture away from the center of the tire. The result is that the tire is lifted by the water away from the road and all traction is thus lost. Skimming stones across a pond or water skiing are great examples. The tyres on the bike work like skis and the rider has no control over direction. Tread design, tread depth, weight of motorcycle, tire pressure and depth of water all play a part in determining at what speed the tire will begin to hydroplane. 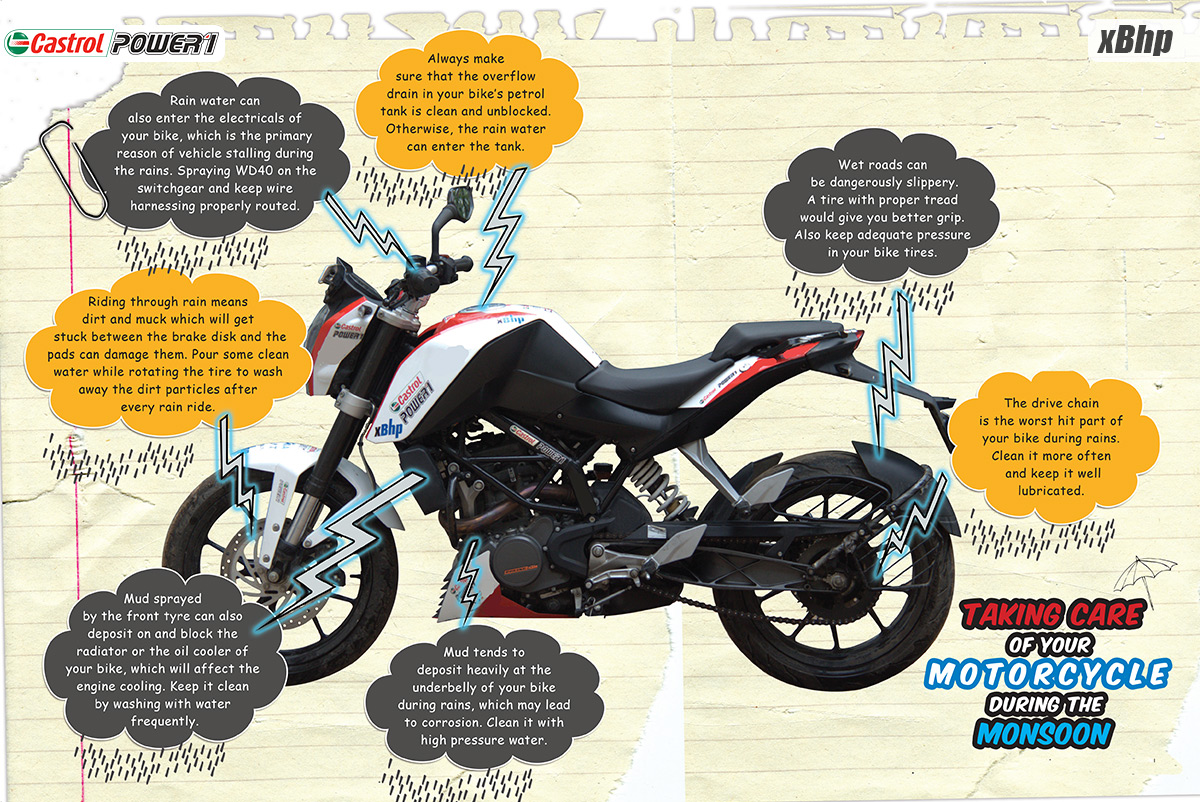 Tips for Riding Safely During Monsoons

If you’ve gone on a ride this monsoon, do share it with your fellow bikers at www.Power1BikingRoutes.com

Mentally drive the vehicle you are following. If you see that he has space to pass through, he will and so will you.